Before Cities Had Street Lights, They Had Giant Towers That Mimicked the Moon

Home Before Cities Had Street Lights, They Had Giant Towers That Mimicked the Moon 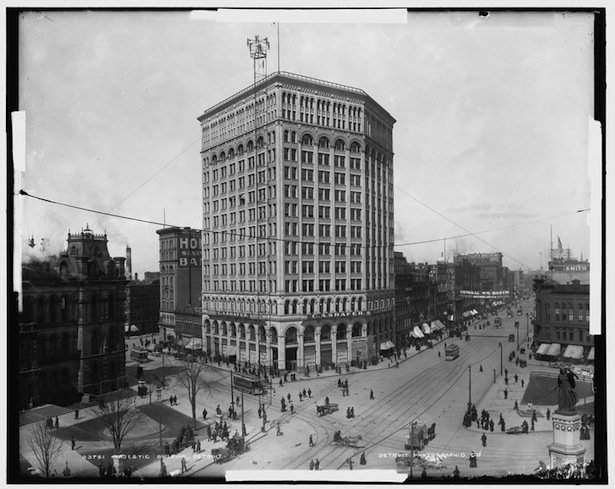 By admin Comments Off on Before Cities Had Street Lights, They Had Giant Towers That Mimicked the Moon

First they tried to make moons.

In the early years of electricity — a time when steady illumination was new and expensive and unwieldy — Americans knew one thing clearly: They wanted light, and lots of it, and as quickly as possible, please. What they were less sure of, though, was how they would get that light. A grid of electric lamps, studded throughout towns — a system that mimicked and often re-purposed the infrastructure of gas lamps — was the early and obvious method. But street lights required wires, which, when hastily assembled, had an annoying tendency to disentangle and fall onto the streets below. At best, this was an inconvenience, at worst, a deadly danger. Street lamps were also investment-intensive: Towns needed a lot of them to provide the bright light that people found themselves craving. They were also expensive. They took time to install. They meant pockets of bright light punctuated, where the lamps failed to reach, by complementary swaths of darkness.

City leaders, racing to bring their towns into the future and encouraged by electric companies seeking the same destination, tried to find better ways, cheaper ways, quicker ways to illuminate the American landscape. And in their haste to vanquish nature by erasing the line between day and night, they ended up looking to nature as a guide. They looked up, seeking a model in the largest and most reliable source of nocturnal light they knew: the moon.

And so, for a brief and literally shining moment early in the days of human-harnessed electricity, the future of municipal lighting was glowing orbs suspended high above cities — towers, resembling oil derricks, capped with 4 to 6 arc lamps with a candlepower of 2,000 to 6,000 each. These man-made moons made the ultimate promise to the people below them: that they would never again be in the dark.

Aurora, Illinois — ironically named only in retrospect — was one of the early places to experiment with artificial moonlight. The town contracted with Charles Francis Brush, an inventor and an entrepreneur and one of Edison’s chief competitors in the race to electrify America. In his wonderful book The Age of Edison: Electric Light and the Invention of Modern America, Ernest Freeberg describes what it’s like to be a town lit, suddenly, by imitation moons. Brush installed his enormous lights, Freeberg notes, via six iron towers studded across Aurora — structures “rising like gigantic pencils over the city’s rooftops.” Stretching high above the skyline, Brush arc lamps provided intense light to the areas directly below them. They also, Freeberg writes, “bathed the surrounding fields and ‘lonely outskirts’ of the city with something like ‘full summer moonlight.'”

In comparison with this display of power, the old gas lamps lining the streets below the towers began to look quaint — “more decorative,” Freeberg writes, “than useful.” Light was, suddenly, everywhere, even and especially where nature had not intended it to be. Night became not-night. The day broadened its reach. And joy ensued. One visitor from Chicago described Aurora’s citizens to be “in a state of delighted enthusiasm over the splendid practical results.” The moonlight towers, he declared, were a “most brilliant success.”

But the towers, it turned out, were neither entirely brilliant nor entirely successful. The problem with a singular light source is the singularity: The light comes, inevitably, at an angle. The powerful illumination from one of Aurora’s man-made moons could be easily blocked by anything that got in its way, be it a tree or a building or a human body. People complained about the disorienting shadows cast by the arc lights, Freeberg notes. They complained about the jarring effects of walking from day to night in the space of a few footfalls. Brush, aware of this problem, focused his moon tower efforts on Midwestern cities that had the twin virtues of being both geographically flat and designed on a grid, thus mitigating the problem of the angles. Still, it soon became clear that many moons would be required to illuminate even the smallest of towns. “Inevitably,” Freeberg writes, engineers “added more towers, replacing a single false moon with a constellation of brilliant stars.”

The man-made heavens made their way to Detroit. Aldermen of the city, Freeberg notes, were eager to swath their city in the grandeur that would come with being “the best lighted in the world.” They contracted with the Brush Company to erect 70 light towers around the city, each one massive and measuring at least 150 feet in height. Brush, recognizing the publicity that could come with lighting the world’s best-lighted city, offered to install the mini-moons at no cost to Detroit — and, to sweeten the deal, promised to charge the city the same rate for electricity that it was already paying for gas. The arrangement was a business transaction with celestial overtones: Brush promised Detroit and its citizens not just the awe of cities that still toiled in the dark, but “a light equal to first-class moonlight.”

During the hot summer of 1882, the installation of the new moon towers became its own kind of brilliant spectacle. People gathered to witness the building of structures that represented Progress and Ingenuity and, in a very real sense, The Future. They also gathered to witness some drama. Since electrical engineers were just learning their trade — that trade, in Detroit’s case, being the erection of 150-foot-tall poles anchoring 500 pounds worth of lights — accidents were, perhaps, inevitable. And falling towers — thin metal, plus gravity — had an uncanny way of slicing through roofs as they toppled toward the ground.

The light itself, though, was the true attraction. It was, as Brush had guaranteed, “picturesque and romantic,” one observer put it. Within the glow of the manmade moons, “the foliage is weird and beautiful. All places within the scope of light are bathed in the faint but fairy-like illumination of the moon in its first-quarter.”

But not all of the crowds were excited about the new buildings studding their town’s landscape. On the contrary, “many Detroiters,” Freeberg writes, “were skeptical from the start.” Some found the towers to be eyesores, each structure braced with a chaotic network of wires and posts. (One man even tried to chop down the wires that hung near his home, an act of civic-cosmetic rebellion for which he was arrested.) The lights also brought unanticipated complications along with their steady illumination. Animals, for one thing, were unaccustomed to the newly extended daytime. Chickens and geese, unable to sleep in this new state of omnipresent light, began to die of exhaustion.

Humans, too, found the high-slung orbs to be as disorienting as they were ethereal. As tall as the towers were, they still left shadows in their wake — shadows tinged with sharp blue light, Freeberg notes, which left pedestrians “dazed and puzzled.” Foggy evenings, combined with the air pollution of a newly industrialized America, could thrust all of Detroit into effective darkness — meaning, Freeberg writes, that “Detroiters could only speculate about the lovely sight that their lights must be creating as they shone down on the blanket of mist and soot that smothered the city.” Even during occasions when the fog broke enough to allow some light to penetrate to the streets below, “many found themselves groping along sidewalks in an eerie gloom.”

In the end, the many costs of the artificial moonlight outweighed its beauty and poetry. The structures meant to inspire awe among outsiders ended up inspiring, ultimately, something more akin to pity. (“It appears to me,” one frank observer put it, “that you are taking a very expensive way of getting a minimum benefit from the electric lights.”) Detroit’s newspaper, the Free Press, finally declared the city’s celestial lighting scheme “a flat failure.” Echoing advice given to city leaders of San Jose, California — which had attempted its own moonlight grid in hopes of becoming the West’s “tower of light city” — the journalists recommended the system we have today: low-slung lights distributed at regular intervals. The electric light the citizens believed in, the paper wrote, “is one that will light the streets, not a few spots here and there, a back yard or two, and the firmament above.”

So the moon towers were replaced, eventually, by a more modular solution. But Detroit’s farewell to its moonlighting was a long one. Some of the towers were dismantled. Some were felled by high winds. Some were brought down, Freeberg notes, by “a rash of runaway mules that, in their ‘fury,’ accidentally knocked down towers.” (This was not limited to Detroit. According to one telling, Freeberg writes, the mayor of Hannibal, Missouri, once happened to blow his nose “with so much vigor” that he spooked a mule, which then “dashed down the street, and ran against an electric light tower a hundred feet high, which at once toppled over.” A New York journalist, commenting on this quaint event — and on similar incidents of four-legged fellings in the region — couldn’t decide “whether this proved that southern mules were stronger than their northern counterparts, or that southern towers were weaker.”)

Detroit’s remaining towers, for their part, moved south: They relocated to Austin, Texas, where city leaders, having newly constructed a dam on the Colorado River, were eager to make use of their harnessed electricity — both for convenience’s sake and for the prevention of crime. In 1894, the City of Austin purchased 31 of Detroit’s used lighting towers. Seventeen of those structures survive today. (You may remember the teenagers from Dazed and Confused assembling kegs for a “party at the moon tower.”) They are now, in the words of one historian, “much-loved curiosities” — objects, generally speaking, of awesomeness rather than awe. And they are, it seems, the last of their kind in America. As a plaque on one of Austin’s remaining moon towers puts it:

“This is one of 17 that remain out of 31 towers erected 1894-95 and in continuous use since. Their carbon arc lights then illuminated the entire city. Now mercury vapor lamps provide beacons for many miles on roads and airway, from dusk to dawn. Austin is said to be unique in this dramatic method of lighting.”