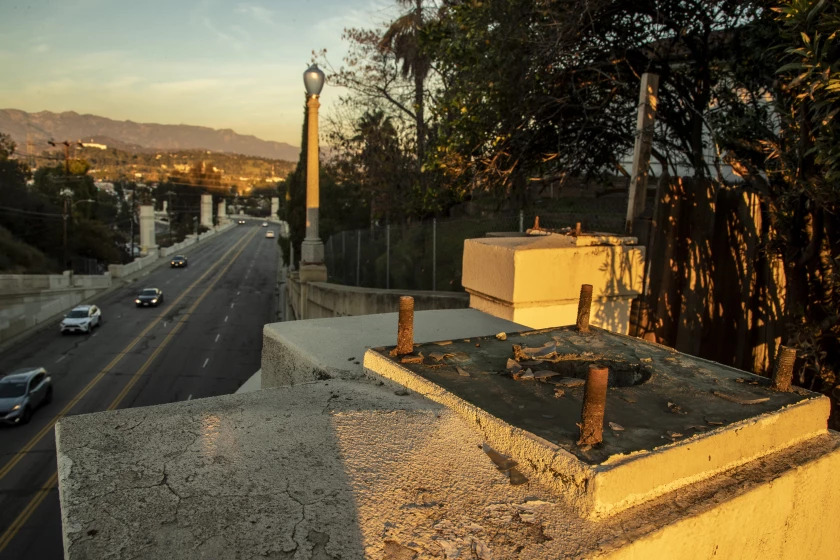 For nearly a century, dozens of silent sentinels have stood guard along the road between Atwater Village and Silver Lake.

Clad in the green patina of weathered bronze, the lampposts lining the historic Glendale-Hyperion Viaduct warded off the darkness that would otherwise engulf the spans.

But in recent months, several of the lampposts have been stolen, reportedly sawed down and hauled away by unidentified thieves, some as recently as this week.

According to the Los Angeles Department of Public Works, 22 of the historic streetlights are missing. City crews have taken down an additional 18 lights and stored them.

On Wednesday, after this article was initially published, the city announced it would remove and store all the remaining lights as a precaution, said Elena Stern, the department’s senior public information director. The fixtures will be replaced by temporary lighting.

“We believe there were/are roughly 60 to 70 historic lights along the bridge, which leaves about 20 to 30 lights left on the bridge,” Stern said. “Because the thefts have been continuing, preserving the remaining iconic lights is the right thing to do.”

And the thefts have continued despite an ongoing Los Angeles police investigation. The most recent occurred sometime between Dec. 27 and Tuesday, Stern said.

The stolen lampposts were installed in 1926 and made of bronze, Stern said, and no replacements are immediately available.

“Replicas would have to be manufactured from scratch to replace,” she said. “The city is contemplating a future retrofit of the bridge for seismic and mobility purposes, which may provide an opportunity in the future to replicate elements that were stolen.”

Read more: City to remove all historic streetlights from Glendale-Hyperion bridge after 22 are stolen