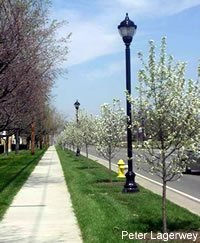 By admin Comments Off on Giving Definition

Whether you call this field “architectural lighting design” or “lighting design,” lighting is about creating a sense of place and atmosphere using light as the main medium of expression.

Some professions are easier to explain than others. Take medicine, law, or architecture. Most people have a sense about what these professions entail and what the people who practice them do. But architectural lighting design is another matter. Neither is it on the public’s radar, nor is it clearly understood.

Complicating this further is the use of both the terms “architectural lighting design” and “lighting design.” This publication uses the two interchangeably; as far as I can tell, having looked through our archive, we have always done so. I’ve always assumed that everyone in the profession understood its definition and also used both terms as a matter of course. But as new people enter the industry, from fields outside of lighting, there is a growing confusion about what the term “architectural lighting design” means.

I have always understood architectural lighting design as the act of crafting space—exterior and interior—with light. This is illumination done in concert with architecture. By extension, one could infer that architectural lighting is meant to last for a substantial period of time, unlike, for example, theatrical lighting, which is created for a specific performance and exists only for the duration of its run.

Crafting space with light requires knowledge, experience, and expertise. It’s a knowledge base very different from, say, that of an artist or an industrial designer focused on designing decorative lamps. (By the way, it is incredibly frustrating to read general consumer “shelter” publications and see a designer who has created a decorative light be referred to as a lighting designer.)

The very fact that this publication is titled ARCHITECTURAL LIGHTING reinforces the fact that there is something about architectural lighting design that distinguishes it from other types of illumination, such as theatrical and entertainment lighting or sports lighting. Take a look at the projects that are part of this year’s AL Light & Architecture Design Awards to understand what this field, with all its complexity and nuance, represents. It requires the ability to work at different scales, in both exterior and interior settings; an understanding of technical issues and the associated vocabulary; an understanding of how to manipulate light, both natural and electric; knowing how a luminaire works; and being able to distinguish what different types of light sources will do in concert with different color temperatures, lenses, and beam spreads.

Whether you call this field “architectural lighting design” or “lighting design” is a game of semantics. At its core, lighting is about creating a sense of place and atmosphere using light as the main medium of expression. It’s about fulfilling the practical needs of a project, whatever the program might be. It means having one’s work blend seamlessly with the architecture, often at the risk of not being seen. It’s about giving definition to a space.