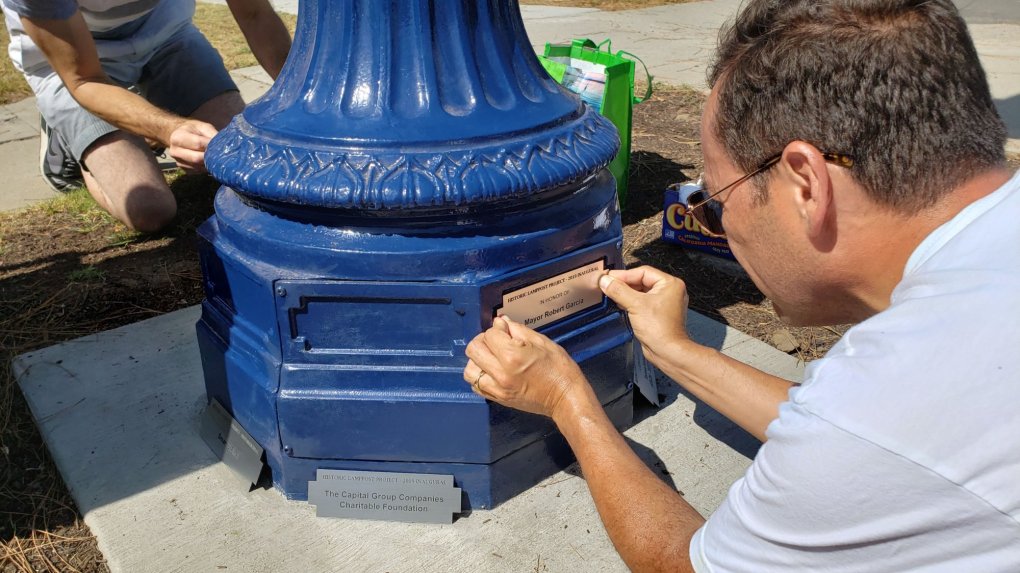 These lamp posts will go in on Temple Avenue in September, after 10 went up on Paloma Avenue in 2019, during the first phase of the project.

“It really started in 2014, after we had a 100-year celebration of homes here,” Jeff Mallin, president of the Bluff Park Neighborhood Association, said. “Some of the folks in other historic neighborhoods sort of pushed the idea.”

The work to find the right lamp posts actually began in the 1990s, said Marco Pizzo, BPNA’s vice president of events and fundraising. A search of city documents uncovered shop drawings of the lamp posts still on First Street in the neighborhood. More digging found the original manufacturer, Union Metal in Canton, Ohio.

“It’s our intention to cover all the streets, between Broadway and Ocean from Loma to Junipero,” Mallin said. “Also Second Street. First Street is what we’re matching.”

But it costs a lot to build the lamp posts, and a lot more to take out the cobra-head lights in place now and install the historic posts with their distinctive glass lamps. BPNA raised $120,000 for the first phase. This second phase, which replaces nine cobra-head poles with 10 of the historic lamp posts, will cost about $130,000.

There was some opposition to the project, primarily from those worried about the light pollution from putting LED bulbs in the glass lanterns. But, Mallin said, the reality as seen on Paloma was not intrusive, and negotiations with the city continue to have “warmer” LED bulbs used.

“It was originally high pressure sodium,” he said. “It’s really a matter of adaptive reuse. The lamp posts come with no wiring, and the city installs them.”

Pizzo said that the $130,000 for the second phase has already been raised and the association has turned its fundraising efforts to the next phase.