To improve health, cities are changing their streetlights

Home To improve health, cities are changing their streetlights 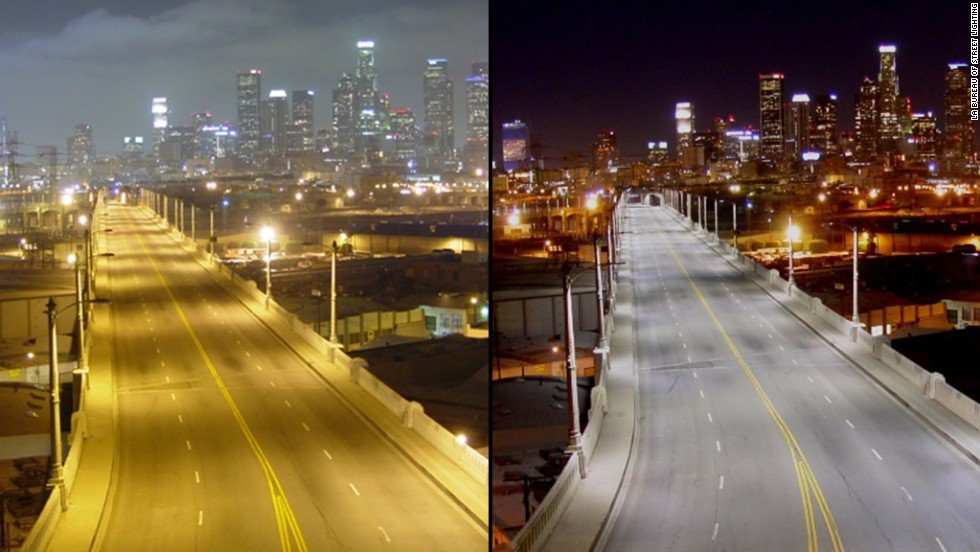 By admin Comments Off on To improve health, cities are changing their streetlights

n response to recent guidance by the American Medical Association against the use of powerful LED lights, cities such as Phoenix; Lake Worth, Florida; and 25 towns in Connecticut are now opting for street lamps with lower color temperatures, meaning less blue light emission.

The association’s policy statement, released in June, suggested that LED lights with color temperatures higher than 3000 Kelvin had adverse effects on health, including eye damage and disrupted sleep patterns. The warning was aimed at large cities, where the standard color temperature for LED street lights is 5000K to 6000K.
Lights with high color temperatures release more blue light, which cause more glare and discomfort to the eyes, according to the association.
Mark Hartman, Phoenix’s chief sustainability officer, plans to minimize the amount of blue light emitted. In October, he’ll present a range of bulb options, from 2700K to 4000K, to the city council.
“Ideally, we want low-Kelvin bulbs everywhere,” Hartman said. “But there is still a remarkable difference in appearance from 5000K to 4000K. The lights may be just as bright, but not as white.”
Twenty-five cities in Connecticut are also following the medical association’s guidelines by installing LED streetlights of 3000K or lower, according to Eversource Energy spokeswoman Tricia Modifica.

The American Medical Association warning raised several health concerns that may result from high-color temperature LED lights. Over time, glare from the lights may cause eye damage and distorted vision, while high levels of blue light in LEDs may stunt circadian rhythms. Sleep issues could bring a host of other problems, including depression and obesity, according to the association.
Marked by their bright white appearance, high-color temperature LEDs may distract drivers, particularly those who are elderly.
“Really bright lights can be worse for aging people,” said Travis Longcore, an architecture professor at the University of Southern California who studies artificial night lighting. Short-wavelength blue light scatters more in the eyes than red and yellow light, which can cause retina damage in extreme cases. For older eyes, this effect may be exacerbated.
However, Longcore said, impaired vision is unlikely unless you stare directly at a light.
Intensely white LED lights may also affect sleep, the association says. It cited several studies suggesting that light exposure, particularly blue light exposure, suppressed the body’s production of melatonin, the hormone that regulates sleep cycles.
“Our brains are particularly sensitive to light that peaks in blue,” Longcore said. “When overexposed to high-color temperature LED lights, our circadian rhythms are more likely to be disrupted.”
Although there is evidence supporting that blue light wavelengths are most successful in suppressing melatonin — keeping us awake, in other words — there is not enough research showing that streetlights themselves cause sleep issues, Longcore said.
“It is very difficult to suppress melatonin,” said Mark Rea, director of the Lighting Research Center at Rensselaer Polytechnic Institute. Staring directly at a light source, like a computer screen, may cause the greatest effect on sleep cycles — but the effect is still weak. An indirect light source, like a street lamp outside the window, isn’t likely to affect sleeping at all, Rea explained.
“There is no direct correlation between outdoor lighting and bedtime,” Longcore agreed. “What we know is that candlelight is better than screen time, and people prefer to live with warmer lights.”

Perhaps less-blue LED lights won’t improve vision and sleep issues, but they may improve another important health factor: quality of life.
“Historically, 5000 to 6000 Kelvin LEDs were the only ones available,” said Phoenix’s Hartman. “They created terrible light. If the bulbs didn’t make you sick, they made you look sick.”
Harsh white light can feel sterile and unflattering, like a “prison atmosphere,” according to city residents interviewed by the American Medical Association.
“Most people don’t want their living space to look like a Walmart parking lot,” Longcore said. “Lighting is often much more intense than it needs to be. You don’t need to do surgery under streetlights.”
Though white bulbs aren’t as aesthetically pleasing as warmer light, safety is a factor to consider when choosing streetlights. An advantage of high-Kelvin LEDs is better visibility, making it easier to spot crime. Because of this, well-lit areas tend to provide residents with peace of mind.
Different approaches are being made to balance safety and comfort, in regards to lighting. Rea and his team are studying the exact lighting needed for someone to feel safe traversing a parking lot. Hartman is proposing motion-sensor lights for parking lots in Phoenix. Longcore suggests using high-Kelvin LEDs in areas known for criminal activity and less intense lights elsewhere.
Modifica is addressing light needs individually.
“Every community has different needs and may choose to have higher color temperature LEDs installed,” said Modifica, of Eversource Energy. “We’re working with the communities to support their specific needs and protect the health and welfare of the public.
Original Source