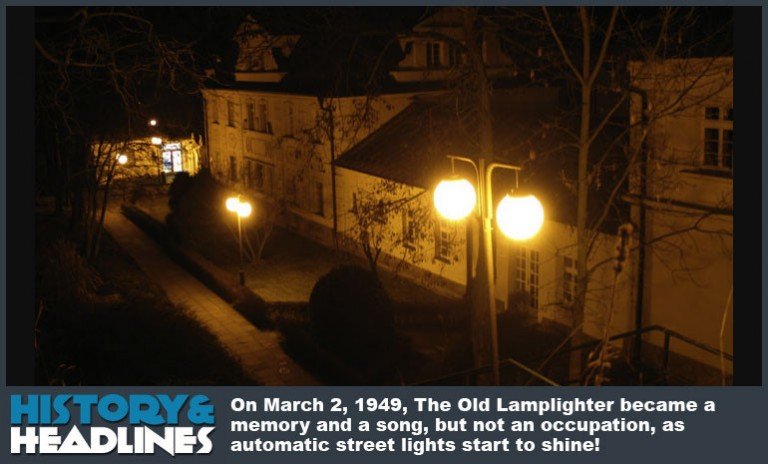 On March 2, 1949, The Old Lamplighter became a memory and a song, but not an occupation, as automatic street lights start to shine, adding to the list of “Famous Inventions by Ohioans“!

Digging deeper, we find on this day, the first automatic street lights go into operation in New Milford, Connecticut.  Prior to this development, electric street lamps, not to be confused with traffic control lights, had to be turned on manually or by timer, regardless of lighting conditions.

With the use of photo cells to turn the lights on only when needed there would be light at dusk and in heavily overcast weather, and even in the rare solar eclipse!  At the same time, electricity would be saved by the lights not coming on when not needed.

The first city in the US to have electric lights installed was Cleveland, Ohio, with the public square area lit up in 1879.  And what about those pesky traffic control lights?

Well, the first use of electric traffic lights was also in Cleveland, at E. 105th Street and Euclid Ave. in 1914.  Prior to the electric lights gas or oil lamps were used and had to be

hand operated by a police officer standing there, not much better than just directing traffic.  The first Green-Yellow-Red pattern lights were installed in 1920 in Detroit.

As far as self illumination for cars, the earliest models had acetylene or kerosene lamps, not very good and not safe.  The first electric lights were very unreliable and could not take the pounding of being on primitive cars on primitive roads.  It took Ohioan Charles Kettering to invent the integrated electrical system linking the car’s starter, ignition and lights (he invented the starter, too) on the 1912 Cadillac.  Fittingly, the Cadillac was also the first car to have high/low beams that could be selected from inside the car instead of walking around to the front and changing them.

Other automobile illumination milestones include sealed beam headlights in 1940, halogen headlights in 1962 (not used in the US until 1978) and high intensity discharge lights in 1991 (sorry Cadillac, it was a BMW first).  The latest leap forward is the LED headlight that runs cool, uses little electricity and lasts much longer than the other types.

LED’s were first installed on the 2008 Lexus.

Of course, drivers that feel the need for more than standard forward illumination have a wide variety of supplemental driving lights, fog lights, snow plow lights, off-road overhead light bars and even day time running lights that always come on automatically even in daylight.

Around 1915 taillights and brake lights started appearing and in 1940 turn signal lights that would turn off automatically upon completion of the turn showed up.

Anyone who has ever driven far from city lights on black nights knows the value of their car’s illumination.  A bit of the past is still observable in rural areas of the Midwest where horse drawn Amish buggies and wagons prowl the dark byways with only a kerosene lantern to guide them and provide warning.  It is not much warning!  This fact is readily apparent every time a car or truck smashes into one and the baffled driver claims he just did not see it.