The Sci-Fi Future of Lamp-Posts

Home The Sci-Fi Future of Lamp-Posts 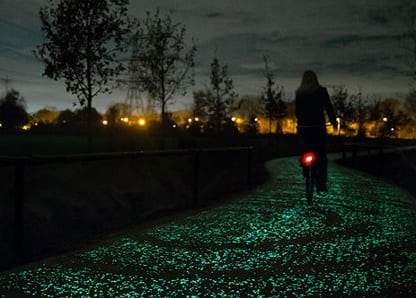 Street lighting has always been a form of social control. As ‘smart’ lamp-posts start to adapt to our needs, are we entering a brave new world of big city lights? 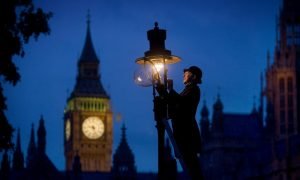 In 1697, a few short years after street lighting made its London debut, one commentator remarked on how this new technology was affecting the nightlife:

“The scatt’ring light gilt all the gaudy way, Some people rose and thought it day. The plying punks crept into holes, Who walk’d the streets before by sholes.”

The night had once been a time of transgression, where “plying punks” (prostitutes) could walk the streets freely “by sholes” (as in a school of fish), but street lighting had changed all that. These dark hours of rebellion were now claimed for the world of public appearances. Street lighting sought to impose discipline on the unruly city streets, opening it up as a safe time for the upper classes to socialise and conduct business, pushing out the punks.

From these first gas lanterns to today’s big data-driven smart LED systems, street lighting has always been a powerful tool of social control: it shapes what is, and what isn’t, permitted in the city after dark. 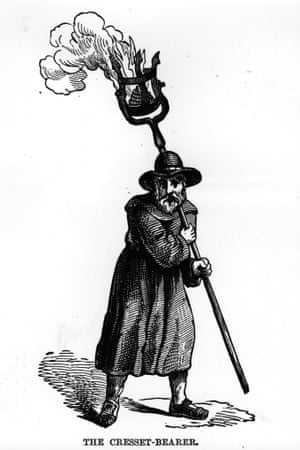 The earliest recorded forms of public street lighting existed in Italy in the 16th century. Ropes soaked in pitch oil were ignited in iron baskets known as cressets, usually outside palaces. The breakthrough that led to our modern street lights was made in the 1660s in Amsterdam by the painter and inventor Jan van der Heyden (1637-1712), who designed a lantern that drew air through it to keep soot from accumulating on the glass. His design was much imitated, so that after centuries of darkness, the installation of oil lanterns in European cities happened very rapidly. As Craig Koslofsky outlines in his terrific history of the night, Evening’s Empire: “In 1660, no European city had permanently illuminated its streets, but by 1700 consistent and reliable street lighting had been established in Amsterdam, Paris, Turin, London, Copenhagen, Hamburg and Vienna.”

The use of street lighting as a form of control can be seen most clearly in Lille, one of the first cities to have lighting installed, only months after Paris and Amsterdam. Here, public lighting was imposed by the French military, who had recently captured the city. Lighting was deployed to pacify the unruly locals and provide greater security at night. It was only decades later that city correspondence referred to the lighting as a “public convenience”. But just as the invention of the ship was also the invention of the shipwreck, this attempt to reduce criminal activity through street lighting inadvertently created a new crime: smashing lanterns. Penalties were severe. In Leipzig, lantern-smashers were deterred by the threat of cutting off one’s right hand.

While the activities of the traditional owners of the night – the young and the restless – may have been marginalised by street lighting, many others stood to benefit from it. In Koslofsky’s book, an etching of Leipzig from 1702 illustrates the social effects. A man points to something in the distance, in arm with his well-dressed female partner; two men doff their hats, where before they wouldn’t have recognised each other; another man reads a book under the glow of the public lantern. As light extends into the night, so do the day’s activities. All of this appears positive and useful – but for whom? This depiction of a well-heeled class engaged in genteel activities suggests it was the bourgeoisie who benefitted, as street lighting made it safe enough for them to brave the evenings. 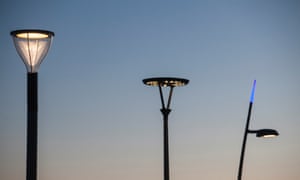 The longer day was not universally welcomed. The editor of Tatler wrote in 1710 that the lighting of London had “thrown business and pleasure into the hours of rest, and by that means made the natural night by half as long as it should be”. Our complaints today of the “always on” lifestyle dictated by the mobile phone find an interesting precedent here. Just as the phone allows you to be reached at any hour, street lighting destroyed the anonymity of the night, when people bearing lanterns could move about unrecognised. One now had to be dressed up for the street, further eroding the boundary between work and rest.

Despite these reservations, the genie was out of the bottle, and the lighting of cities worldwide was inexorable. The journal of a German visitor from 1782, now held in the British Library, describes London’s street lights as being “so near to each other, that even on the most ordinary and common nights, the city has the appearance of a festive illusion”. Piped gas was rolled out in 1807; by the 1820s London had more than 40,000 gas lights, lining 215 miles of streets. Electric lighting was introduced in London in the 1880s, and gradually expanded its reach across the country.

Today, up to 40% of a city’s electricity use is dedicated to street lighting, keeping those yellow sodium vapour lights humming through the night. As local councils’ budgets are reduced, they’re eagerly looking to find savings and reduce costs. Los Angeles has recently completed the world’s largest lighting retrofit, replacing 141,000 street lights with LEDs fixtures, with many other US cities following suit. Another strategy is to simply switch them off. Apparently one in three UK councils are experimenting with dimming or blacking out street lights at times of low usage, not without consequences for safety. Switch out the lights, and the dangers of the night creep back in. 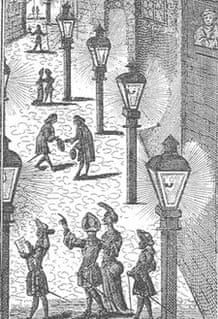 The next big thing in lighting, as with seemingly everything today, is “smart”. The Philips company’s IntelligentCity system offers a “complete insight into what is taking place within your lighting system, [and] allows you to communicate with it”. This is the world of the city dashboard, a central control system of glowing monitors and data feeds, promising mayors and city officials a god’s-eye view of their city, and the ability to control it at the swipe of a touchscreen. This promise isn’t new, it has its roots in the cybernetic thinking of the 1960s, a fascinating history Evgeny Morozov explores over at the New Yorker. But with today’s technology, the dream of the smart city dashboard finally appears realisable.

These systems are promoted as environmentally friendly and cost effective. Philips claims that switching to LED street lights and installing intelligent systems can save cities 70% on energy. But just as with the earliest gas lamps, the IntelligentCity system is also pitched as a way to maintain social control, “prevent[ing] crime by keeping lights on in problematic neighbourhoods”. The latest product in Philips’ arsenal is the LumiMotion lamp-post, a street light and motion sensor in one, which lights up as people walk under it. And new navigational headsets for blind people use sensors in lamp-posts to help you “hear” your surroundings as a “3D soundscape”.

Do these generally useful new technologies also point toward a more sinister future for public lighting? In the pursuit of adapting to the public’s needs, these pieces of urban infrastructure are harvesting more and more private data, further eroding our privacy. Similarly to the smart bins that caused outrage in London last year for tracking smartphones, smart lamp-posts proposed for Chicago will scoop up the mobile phone traffic of passers-by. At stake is the question of who owns this data and what’s done with it. When public infrastructure such as lamp-posts become tools for private companies to snoop on public citizens, a line is crossed. 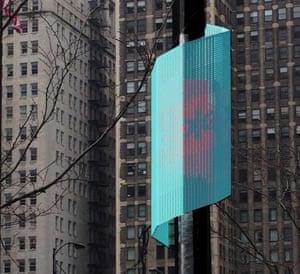 The future of street lighting may not be lamp-posts at all. Three hundred and fifty years after Jan van der Heyden, another Dutch designer, Daan Roosegaarde, is developing a new approach to public lighting that does away with lights on poles altogether. His work draws upon ideas of biomimicry, asking what can we learn from nature to apply to the built environment. The Smart Highway near Oss in the Netherlands uses glow-in-the-dark paint as the road markings; they’ve also trialed glow-in-the-dark stones as a bicycle path.

But Roosegaarde’s big trick is bioluminescence. Working with the State University of New York, he has developed a prototype plant containing luciferin, the compound that produces light in a firefly or jellyfish. His team is now working on bioluminescent street trees, which would effectively replace existing street lights. “It’s energy neutral, but also very poetic,” says Roosegarde. “I think in the end the technology will completely disappear.”

In this future, where trees glow into the evening, nature is adapted to conform to our nocturnal lifestyles, providing a soft green glow. Perhaps this beautiful sight could even tempt the plying punks out of their holes.