These shapeshifting streetlights are slow tech at its finest

Home These shapeshifting streetlights are slow tech at its finest 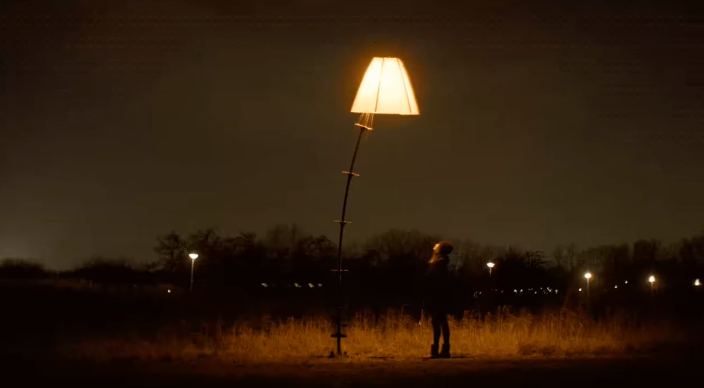 There’s a scene in Alice in Wonderland where Alice walks into a garden and hears a voice. She turns and sees a rose that has come to life, its red petals expressively leaning toward her. Soon, all the flowers in the garden have animated, turning to face her and breaking out in song.

Well that’s almost becoming a reality with a new streetlight design by Dutch design firm Vouw. Bloomlight, as it’s called, isn’t animated and doesn’t sing—but it does bring the natural world to life by blooming in your presence.

Bloomlight, which is activated by nearby movement, works through a series of both low- and high-tech components. The light’s base—or stem—is made out of a very tall, bendable central tube. Six steel wires that run over the 14-foot-tall light are connected to stepper motors, which then pull the wires and cause the structure to bend.

But the lamp doesn’t just bend. It also blooms. The lamp head, made out of painted wooden slats connected by fabric, are connected to the motor, too. When it’s activated, a 3D-printed mechanism in the lamp begins to turn and pushes the slats open.

This is all triggered when a LiDAR sensor—a kind of laser technology also used by self-driving cars—detects people walking by. That triggers the motor, which causes the lamp to bend toward the person and the lamp shade to open up and “bloom.”

Justus Bruns, partner at Vouw, says Bloomlight is an example of what he calls “slow tech,” which “uses technology to bring people together, closer to nature and beauty in general.” It’s also an industrial design approach to biomimicry, in which design imitates the biological processes of the natural world. The light has been tested near Vouw’s studio in Amsterdam, and will make its debut at the Taiwan Lantern Festival in Hsinchu this summer.

Bruns says he and his team were inspired by the way that grass moves through wind, saying they wanted to “create something that moves more curiously and naturally than most technological objects.” Bloomlight certainly does, by using elegant design and responsive biomimicry to create a moment of surprise interaction as it lights up the everyday mundane.

Read more: These shapeshifting streetlights are slow tech at its finest