How Something as Small as Street Lights Can Reduce Crime

Home How Something as Small as Street Lights Can Reduce Crime 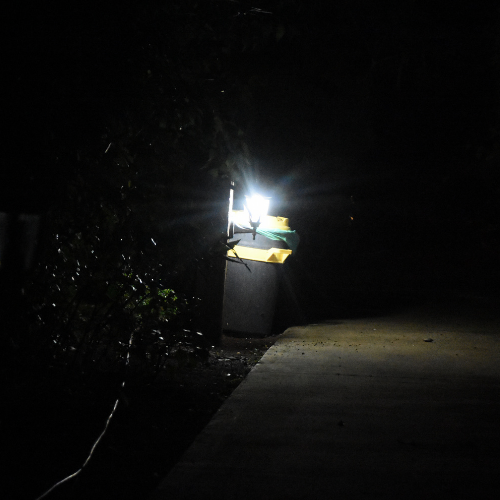 Street lighting can make a large impact on  the well-being of a city.

According to Strong Towns:

At the core of the Strong Towns vision for making our cities wealthier and more resilient is an approach we have called Neighborhoods First. It stands in dramatic contrast to the way most cities approach public investment: in large chunks of money and staff time, allocated to a handful of flagship projects through elaborate top-down planning processes. The assumption underlying that default approach is that we need big programs to tackle big problems, and that anything else is a waste of time.

In fact, what we leave on the table by failing to sweat the small stuff is huge. If you get out in a neighborhood and start asking people where they struggle to negotiate their environment, they’ll tell you things like:

“It’s too dangerous to cross the street at this one intersection. Cars whiz by without slowing down.”

“That sidewalk is so cracked and buckled that I can’t push my grandpa’s wheelchair along it, so we have to walk in the street.”

“I don’t use the park in my neighborhood because there are no shady places to sit, and it’s too hot on a summer afternoon.”

“I’d take the bus, but I’m afraid to walk home alone at night from the stop. It’s poorly lit and I don’t feel safe.”

The problem is too often, we don’t have a feedback mechanism that translates these insights in a quick, responsive way into small-scale interventions that we actually put a bit of money behind and get done. When everything has to go through multiple public commissions and layers of approval, the process favors big initiatives with political momentum, and the small stuff gets ignored.

This despite an abundance of evidence that the small stuff is absolutely critical for how we, as residents, experience our cities. Take, for example, a striking new study from the National Bureau of Economic Research (NBER).

Evidence for the Benefits of Low-Cost Interventions: The First Randomized Experiment on How Street Lighting Improves Public Safety
Researchers Aaron Chalfin, Benjamin Hansen, Jason Lerner, and Lucie Parker conducted a study, whose results were published in May 2019, to examine the effect of lighting on crime in public housing in New York. You can access the study here, or find a full draft version on Aaron Chalfin’s website.

Crime carries huge social costs for neighborhoods and their residents, but its effects are extremely localized—it’s common that even in a high-crime neighborhood, there are blocks where it happens and blocks where it almost never does. The question is why, and researchers over the decades have attempted to answer that, often pinpointing environmental or situational factors as well as social ones. For example, “broken windows” theories around since the 1980s have suggested that the presence of visible disorder begets more disorder by signaling that an area is not well surveilled or taken care of. (Note that this is different from the similarly-named, and controversial, “broken windows” model of policing.)

Lighting has also been singled out as important, because it alerts potential criminals that they might be seen, and renders potential victims more able to protect themselves. Prior studies have suggested that lighting is associated with lower crime, but their inconclusiveness as to cause-and-effect ultimately led the National Institute of Justice to tell Congress in 1997 that “we can have very little confidence that improved lighting prevents crime.” (As described in the NBER study.)

What’s different, and groundbreaking, about this new study is that it’s experimental rather than just observational. This means it more easily avoids factors that might bias the results, such as a possible preference among city governments for putting better lighting in areas that were already low-crime. A controlled experiment lets you demonstrate cause and effect, not just correlation.

The researchers partnered with the New York City Mayor’s Office for Criminal Justice (MOCJ), the New York City Police Department (NYPD), and New York City Housing Authority (NYCHA), to do a randomized trial in which they installed new light towers in 40 public housing complexes, out of 80 selected for the study. They also randomly varied the intensity of light within those 40. This allowed them to do an apples-to-apples comparison of the effect that additional outdoor light had on crime rates.

The researchers focused on “index crimes”—the most serious ones, including murder, manslaughter, robbery, felony assault, burglary, grand larceny, and motor vehicle theft. Although the underlying rate of these is low, the massive number of people living in New York public housing (over 400,000, larger than many cities) meant that it was possible to get a large enough sample to produce meaningful results. The study found a strikingly large cause-and-effect relationship from the added lighting:

We estimate that the introduction of marginal lighting reduced outdoor nighttime index crimes by approximately 60 percent and, by at least 36 percent, once potential spatial spillovers are accounted for. These findings provide the first evidence that the physical environment of cities and communities is a key determinant of serious crime.

The “spillover” issue mentioned refers to the possibility that criminals deterred by a well-lit environment will simply go somewhere else to commit the same crime. The researchers accounted for that by looking at crime rates within a few blocks of the actual public housing projects, and found that even with the possibility of spillovers, lighting reduced outdoor, nighttime crime by more than 1/3.

The researchers are clear about the implications of their finding for how we think about solving urban problems:

“Can crime, in fact, be shifted by a relatively small situational change? Public policy has largely dismissed this idea, focusing either on costly enforcement actions or, alternatively, on resource-intensive social programs.”

“Low-cost interventions that leverage seemingly small environmental changes are particularly attractive as they have the potential to change costly behaviors without the need for resource-intensive interventions which can be invasive, infeasible and difficult to scale.“

Better lighting in response to crime fears is an example of a low-cost intervention that cities could deploy based on actual, reported needs. Certainly there is no shortage of reported need in New York: the NBER paper cites a study conducted by the NYC Mayor’s Office that “found that only 21 percent of public housing residents felt safe walking around their neighborhood at night, compared to 50 percent who felt safe during the daytime. More broadly, from 2010 to 2016, complaints about street lighting outages were the third most common complaint to the city’s 311 system, indicating that residents notice and register concern when lights are not functional.”

The study estimates the benefit-to-cost ratio of lighting upgrades to abate crime, suggesting that it is about 4 to 1.

So why don’t we do these low-cost interventions more often? The answer is, at least in part, about politics:

Since the benefits of crime control will accrue over a relatively long time horizon, a social planner who is seeking to optimize over a fixed time horizon may find spending on technology to be an unattractive proposition. .… [L]ocal public capital goods could also be underprovided due to the extended time needed for those investments to pay off, relative to traditional electoral cycles.

This is a fancy way of saying that elected officials tend to favor projects that offer a political payoff: neatly packaged initiatives they can champion, showcase and take credit for in relatively short order.

And yet, many of the highest-returning investments our cities can make are not these things, but much more modest investments—like better street lighting—that maintain a pleasant, safe environment at a small scale, and thus encourage people to make private investments in the stability and long-term prosperity of their neighborhoods. We need systems that allow those low-risk, high-return projects to be identified, funded, and implemented without years of bureaucracy. And it helps to have research like this to remind us that the benefits are real and substantial.