How do the Streetlights Turn on Automatically at Night?

Home How do the Streetlights Turn on Automatically at Night? 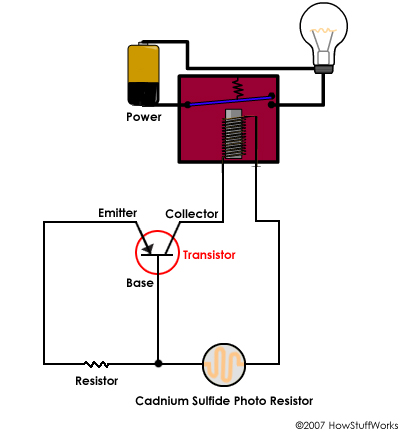 By admin Comments Off on How do the Streetlights Turn on Automatically at Night?

On the Flintstones, a small bird sits inside the light and turns it on every night before he goes to bed. In a modern streetlight, a small circuit replaces the bird and turns the light on when the amount of light falls below a certain threshold.

A common light-sensing component is the cadmium sulfide photo-resistor, also known as a CdS cell. A photo-resistor changes its resistance based on the amount of light that hits it. When a lot of light hits it, it has almost zero resistance — it conducts electricity very well. When no light hits it, it has high resistance — it conducts electricity poorly. In an extremely simple circuit, you would wire a CdS cell directly to a relay, so that a lot of light would energize the electromagnet and a small amount of light would not. Usually, however, a CdS cell cannot draw enough current to activate the relay when light hits it. Therefore you need to add a transistor to amplify the current that flows through the CdS cell. A typical circuit might look like this:

In a real street light the circuit might be a bit more advanced, but not a lot. It has the CdS cell, the transistor and the relay, but might need more than one transistor depending on the size of the relay. It really is a very simple circuit!