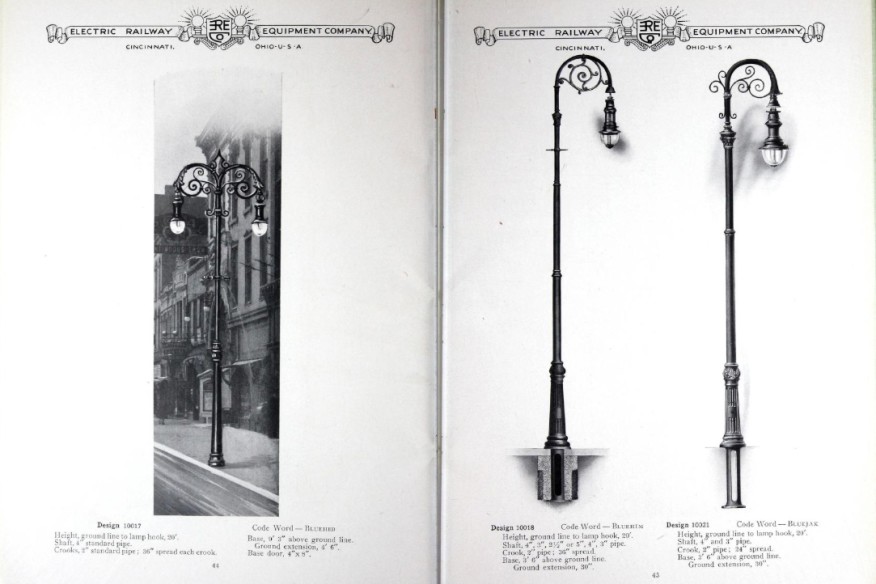 Street Lighting is a critical component of any urban landscape providing illumination for circulation, ambiance, and security in outdoor environments. And while LEDs have become the gold standard for new street lighting technology, cities around the world once relied on gas, carbon arc, and incandescent lamps to light their streets.

Below, the BTHL chronicles the evolution of street lighting design and technology from the 19th and 20th centuries.

The Globe Gas Light Co. of Boston, 1877
When this catalog was published, Globe Gas’ “vapor burner” streetlights were operating in more than 500 towns across the country. The lantern-style fixtures were offered in tin, copper, or brass with iron or wood posts.

The Edison Light, The Edison Co. for Isolated Lighting, New York, 1883
This publication offers both descriptions of the lighting systems offered—arc and incandescent lamps—as well as safety disclaimers given the newness of the technology. “The light, although bright and clear, is not injurious to the eyes, even if used close to them.”

, Van DePoele Electric Light Co., Chicago, 1884
Electric arc lamps of the late 19th century burned both brightly and very hot, making them a suitable solution for outdoor fixtures. This manufacturer advertised the use of arc lamps in tower lighting systems for cities.

The Kitson Light, Kitson Hydro-Carbon Heating & Incandescent Lighting Co., Philadelphia, c. 1899
Kitson promoted its patented pressurized gas lamp as far superior to other gas lamps. Birmingham, Ala., was the first city to install its technology, in 1897.

Glimpses of New York, The New York Edison Co., New York, c. 1911
This nuanced promotional material from the New York subsidiary of Edison Inc. features artistic depictions and photos of New York City, with anecdotal sidebars about the electric industry throughout. The catalog also references the use of sign lighting as an important feature of the urban nightscape.

Ornamental Street Lamp Posts, Mast Arms, and Brackets, Electric Railway Equipment Co., Cincinnati, 1914
This catalog features an variety of cast iron lamp posts for single and multiple globes fitted with incandescent lamps. The design of street lighting was an important part of the city sidewalk during the “city beautiful movement” of the early 20th century.

Street Lighting with Mazda Lamps, Edison Lamp Works, Harrison, N.J., 1925
This is a detailed, illustrated guide to the visual and technical characteristics of urban lighting systems. By this time, the incandescent light bulb had largely replaced the arc lamp as the prevailing lighting technology until newer light sources suited for the outdoors came along.