Work would begin in May 2022 to convert 84,000 streetlights to energy-efficient LEDs

Home Work would begin in May 2022 to convert 84,000 streetlights to energy-efficient LEDs 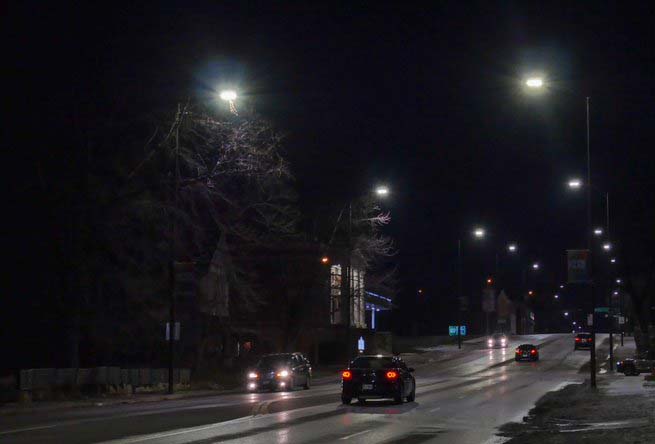 By admin Comments Off on Work would begin in May 2022 to convert 84,000 streetlights to energy-efficient LEDs

The City Council is set to vote on a LED Streetlights contract that will begin a citywide conversion of all streetlights to energy-efficient LED bulbs and fixtures. This means Kansas City, Missouri, residents will soon have higher quality street lighting at a lower cost.

This innovative, cost-saving and energy-efficient project will replace 84,000 streetlights with modern LED lights that will bring many benefits to the City and KCMO taxpayers:

“Our goal in converting all of our streetlights to LED bulbs will cut costs and improve quality of city services with the added benefits of reducing carbon emissions and improving public safety,” said City Manager Brian Platt. “The city will save millions of taxpayer dollars annually with new LED bulbs because of reduced energy needs and far less maintenance and servicing required while providing better lighting in every neighborhood of the city.”

The contract is on today’s agenda for the Transportation, Infrastructure and Operations Committee, so tune in to Channel 2 at 9 a.m. to hear the discussion.

If approved, Black and McDonald will install the 84,000 new LED bulbs within the next 36 months. Work will proceed concurrently across the City’s six districts. The cost of this conversion is approximately $21 million, but the City projects the lights will practically pay for themselves in 7-8 years.

The first through third-year savings would be approximately $500,000, $1.5 million and $2.5 million, respectively, as the lights are being converted. The operations and maintenance savings will be over $3 million annually from year four through 10.

“The Public Works Department worked diligently over the last several months to put together an LED Streetlight Conversion contract that will yield immediate savings on energy costs,” said Michael Shaw, Director of Public Works. “We are excited to undertake this project starting in 2022, which will not only save the city and taxpayer dollars, but will also make Kansas City a greener, safer and healthier place to live.”

It costs the City approximately $13 million a year to power and operate nearly 100,000 streetlights. The electricity costs about $7 million per year and maintenance costs are around $6 million per year. Standard streetlight bulbs need replacement every four years, while LED bulbs last 10 years or longer and use up to 50% less energy than standard bulbs.

In addition to saving millions of dollars, the conversion will also greatly reduce CO2 emissions. Our current streetlights energy consumption produces almost 70,000 tons of CO2 per year. This chart illustrates the estimated carbon savings per year for the next 10 years:

Read more: Work would begin in May 2022 to convert 84,000 streetlights to energy-efficient LEDs